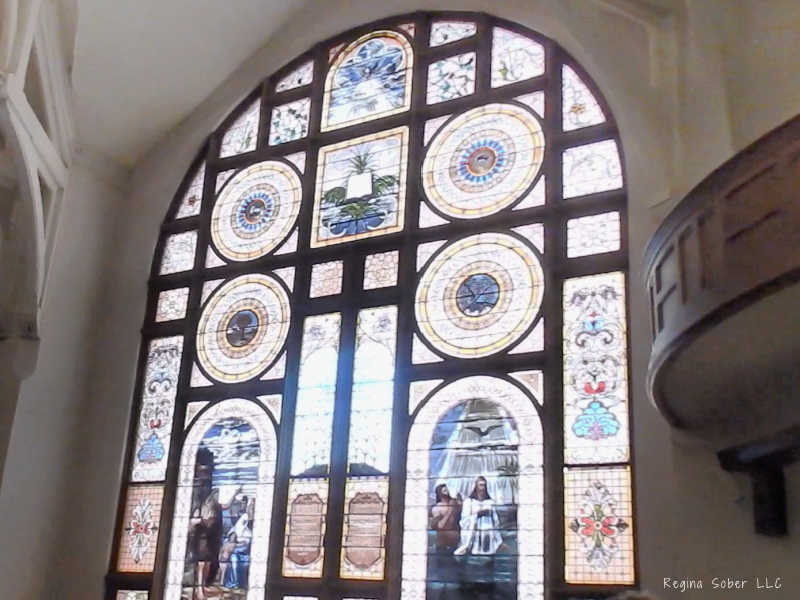 There are things to do in Lansing.  If you are downtown, be sure to stop and see the historic churches in Lansing, Michigan. Several beautiful churches can be found in the heart of downtown Lansing, located near the state capitol building. These churches are a testament to the city’s rich history and heritage. Visitors and residents can explore these beautiful buildings and learn about their significance to the community.

These historic churches have beautiful architectural structure elements on the outside that draw you. Step inside their sanctuary, sit in the pews and be amazed at the organs, the pristine stained glass. 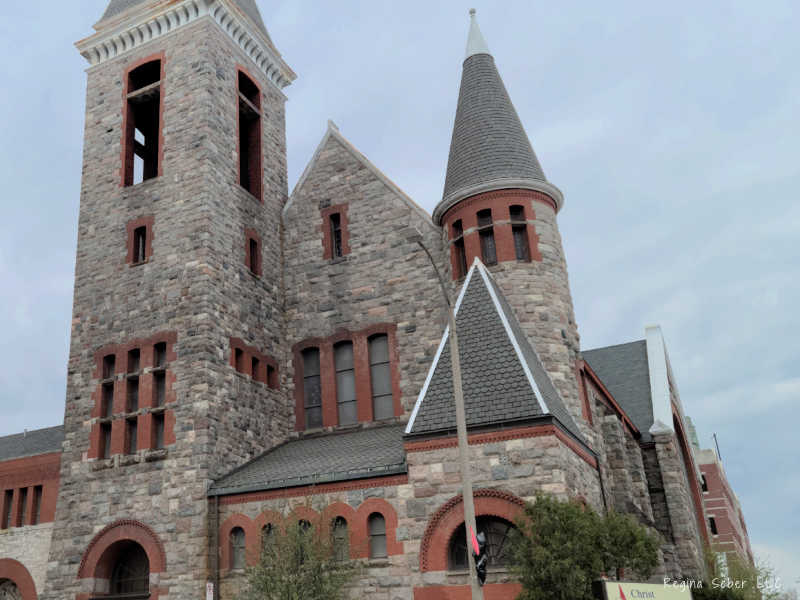 The Christ Community Church is located in downtown Lansing, Michigan. It is in the building that is the former First Baptist Church. The church has been in operation since 1851 but was renamed Christ Community Church around 2004. According to their website, they are known for their historic organ, which was a gift from the R.E. Olds family (known from the REO Motor Car Company). 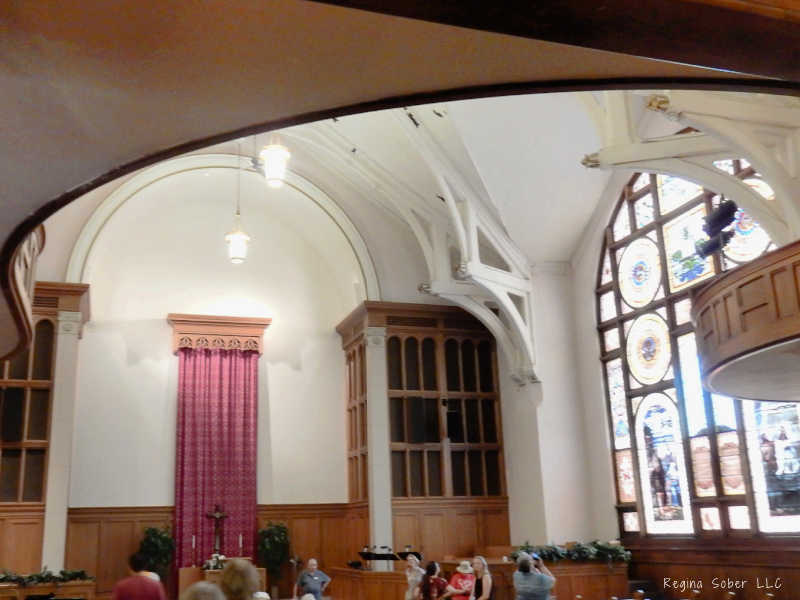 Inside the church sanctuary.

Gorgeous stained glass that shares so many biblical stories. 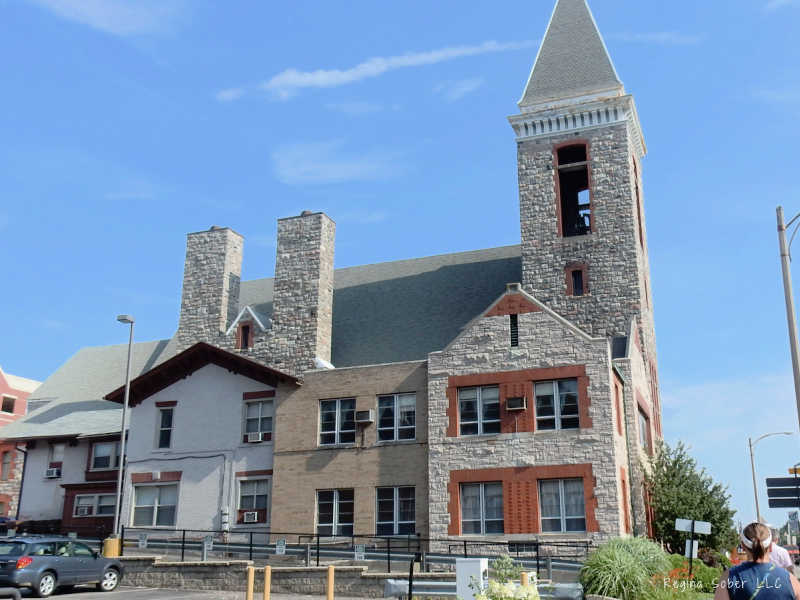 The parish has been incorporated into the building, do you see it? 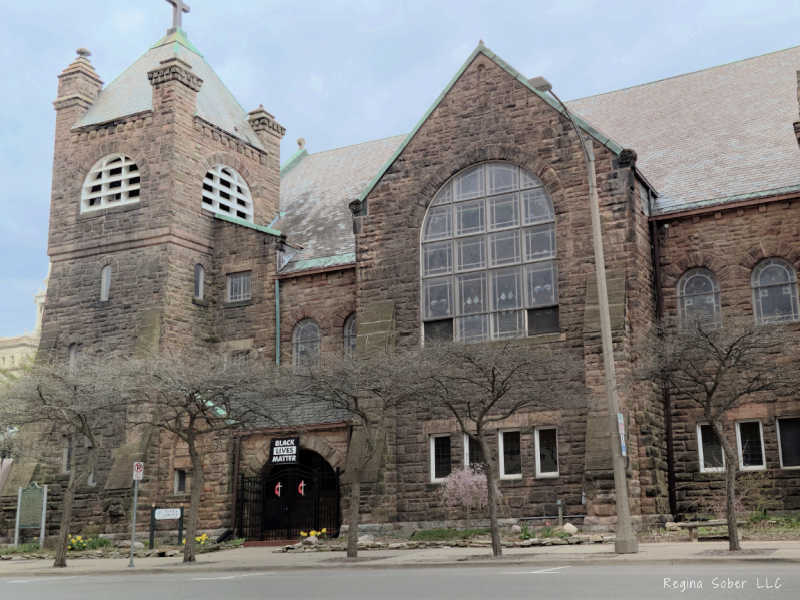 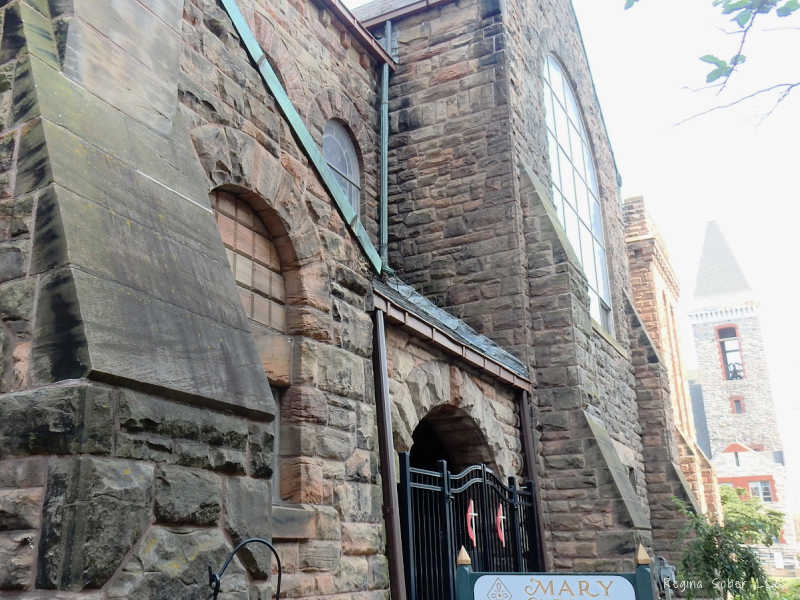 The stained glass windows are gorgeous when the light shows the details of the designs. Located at the back of the church is the old parish too. 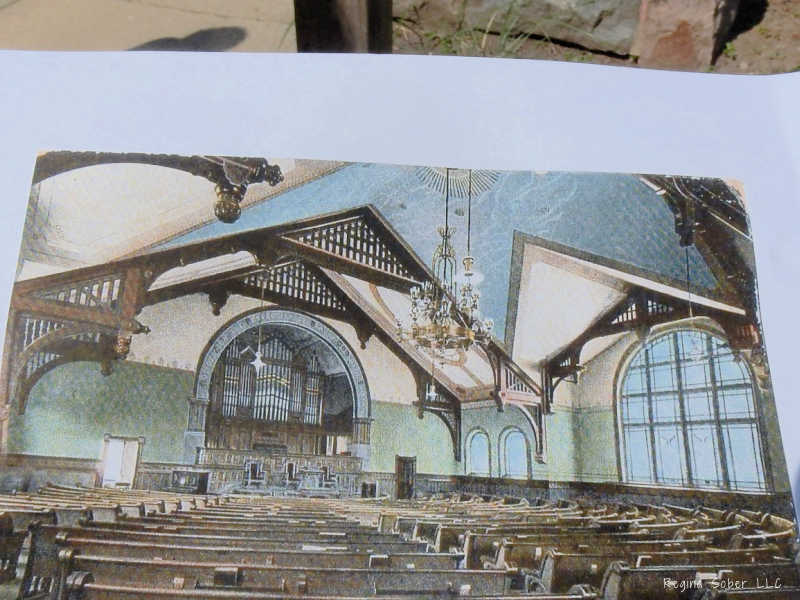 The Central United Methodist Church is listed on the National Register of Historic Places by the U.S. Department of Interior and is also a registered Michigan Historic Site. Designed by architect Elijah E. Meyers. 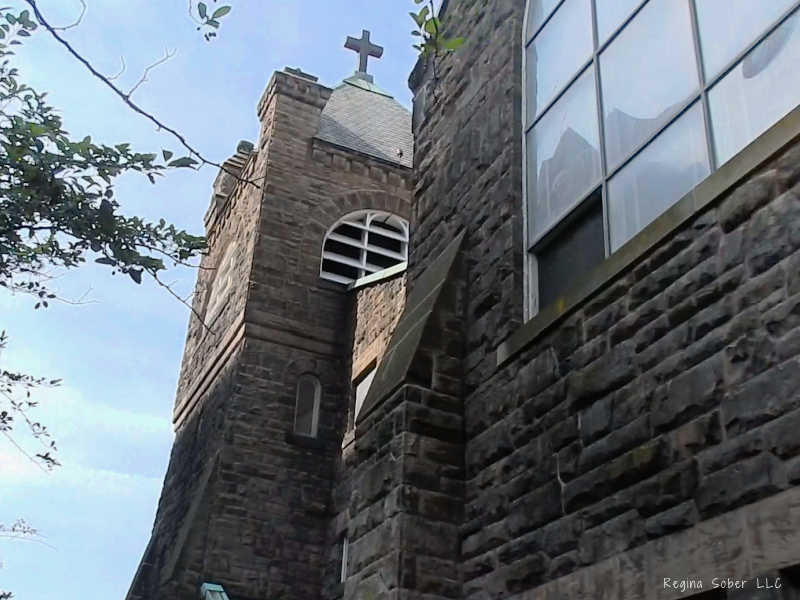 Find the church right across from the state capital. 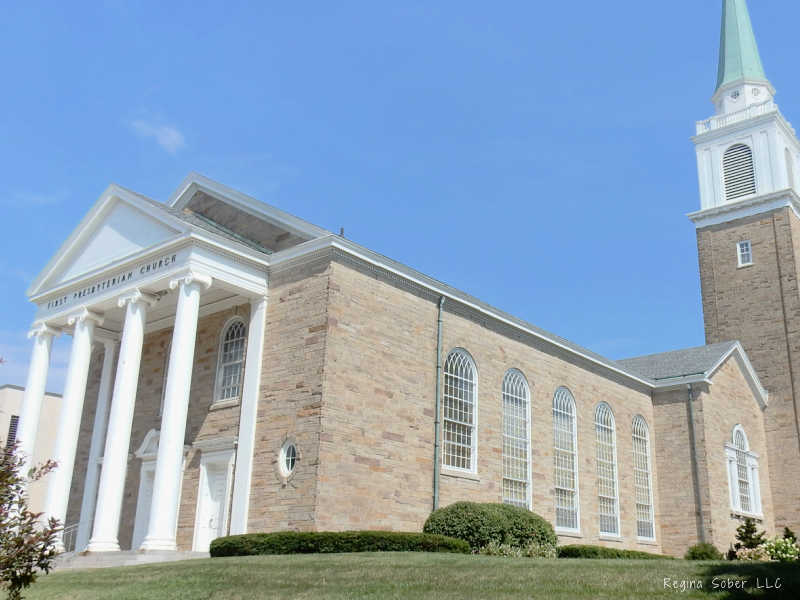 The First Presbyterian Church in Lansing, Michigan and housed the first bell in Lansing. The church quickly became an important part of the community, and it played a significant role in the city’s development. The church bell was used to signal noon, curfew, and the firemen. 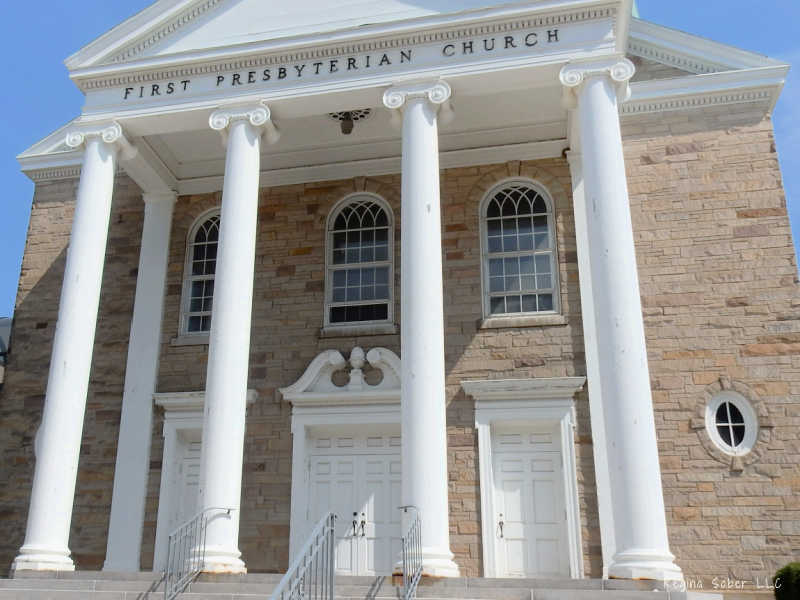 Beautiful pillars of the entrance of the church.

Find the church is located in the heart of downtown Lansing on Ottawa, and it is one of the city’s most recognizable landmarks. The church was located on North Washington and Genesee in 1852. They moved to a new building on Capitol Avenue and Allegan Street in 1889. 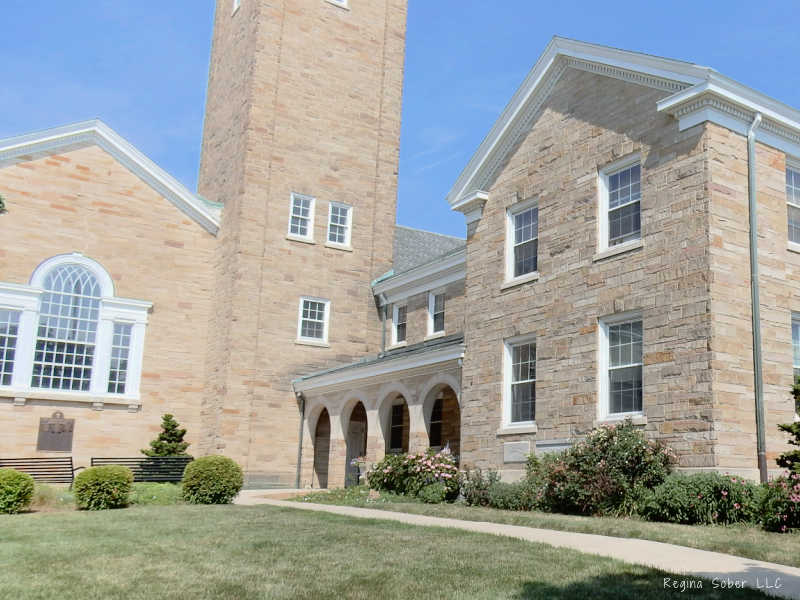 Beautiful landscaping outside the church.

The congregation moved again to their current location on Ottawa Street in 1948 to the former Christian Science Church building. 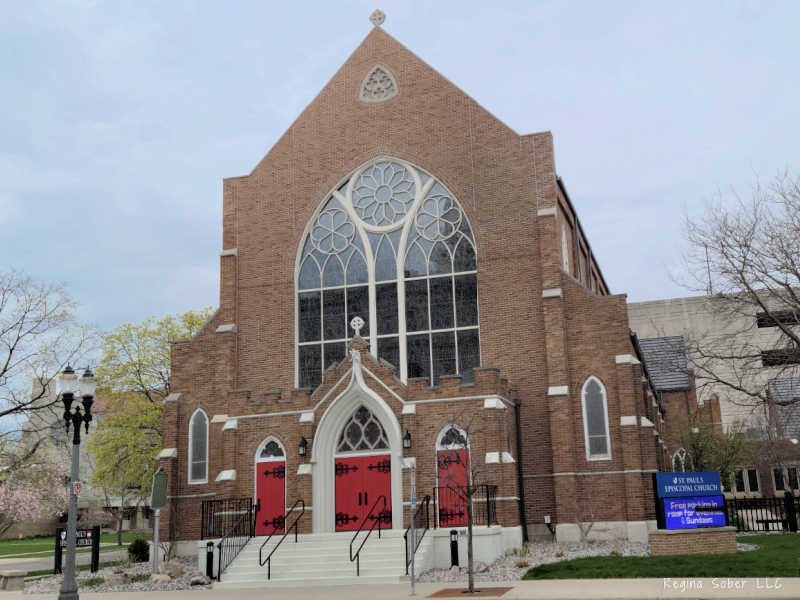 Saint Paul’s Episcopal Church is also located in downtown Lansing, Michigan on West Ottawa. This church was built in 1914 in a Neo-Gothic-inspired church, designed by Samuel D. Butterworth. 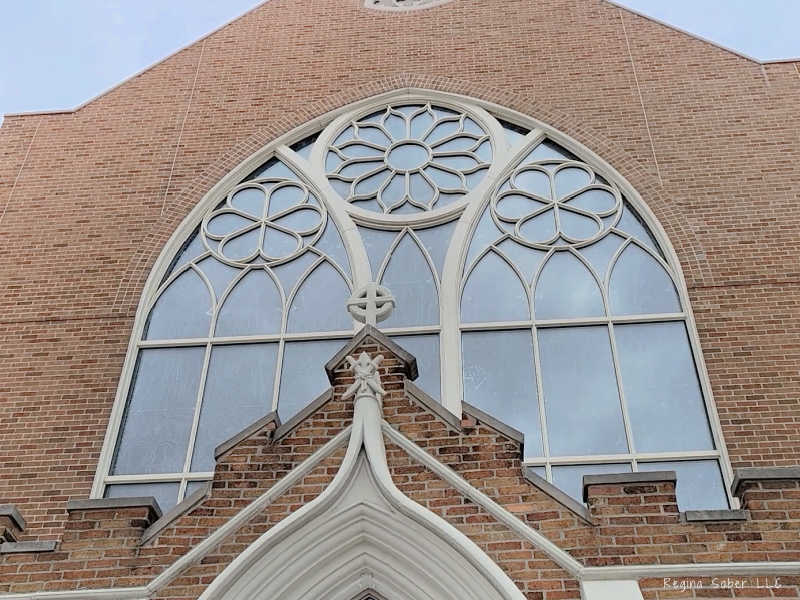 Many details went into the design of the church windows 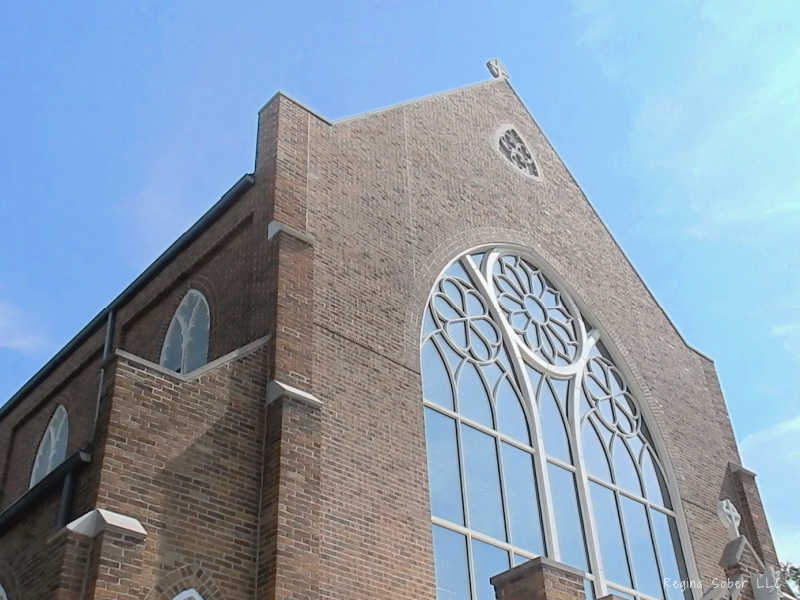 The church has beautiful windows that curve and make the church stand out. 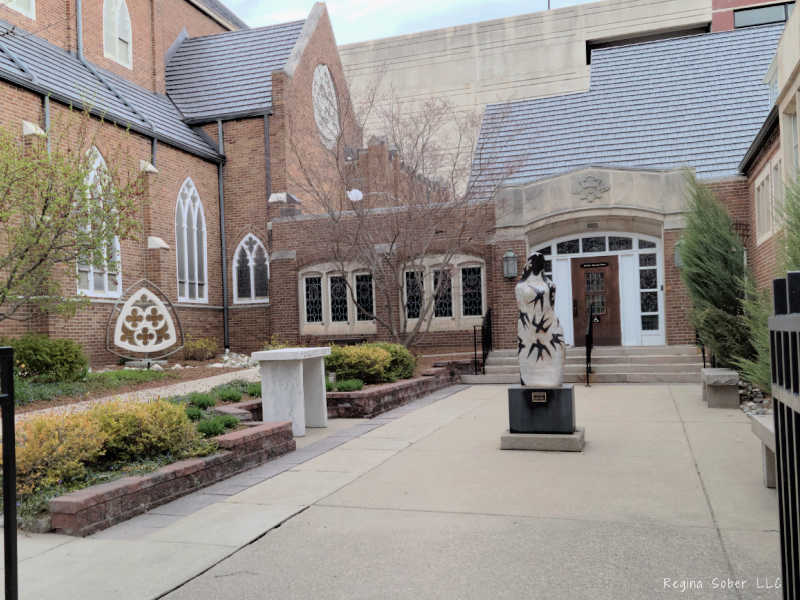 Inside the memorial garden.

There is a beautiful garden and sitting area at the church as well. Four buildings make up this location: the church, chapel, parish, and annex. Inside you can view the stained glass windows, wood carvings, and needlework that has been gathered over a century. 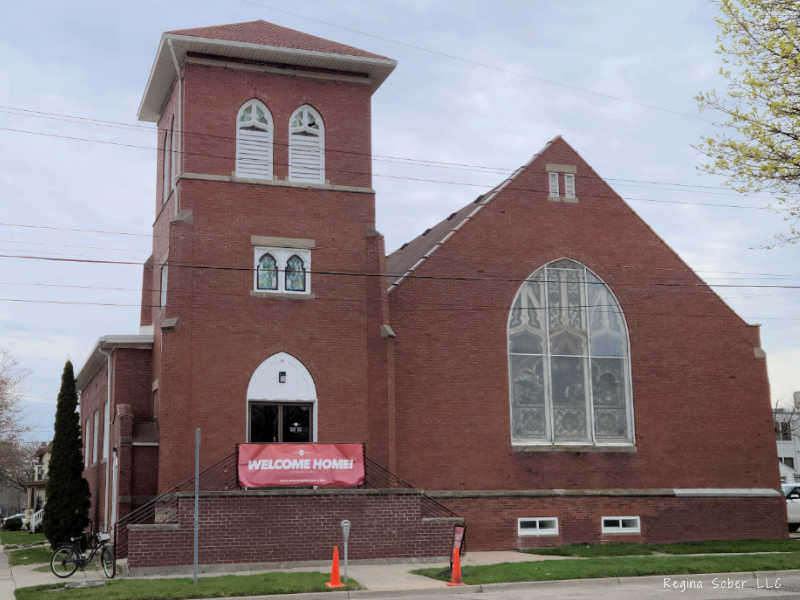 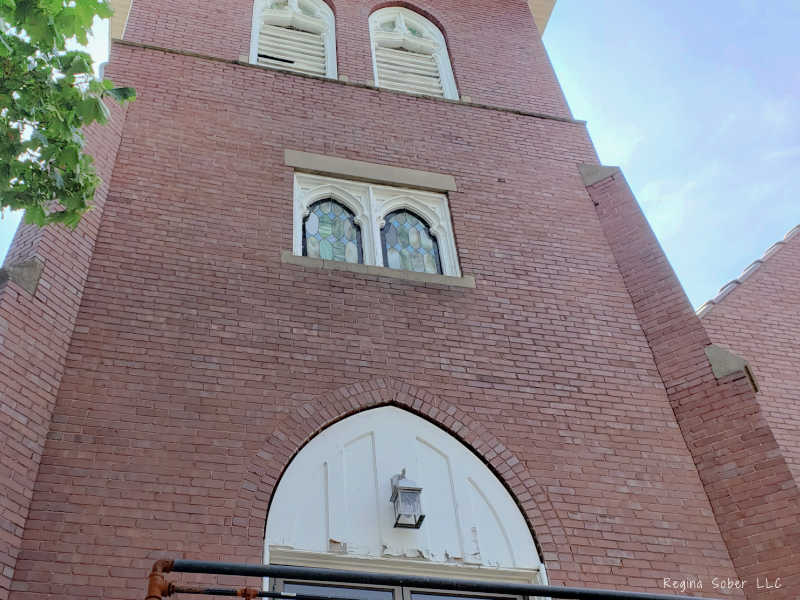 The architecture and glass stand against the red brick exterior. 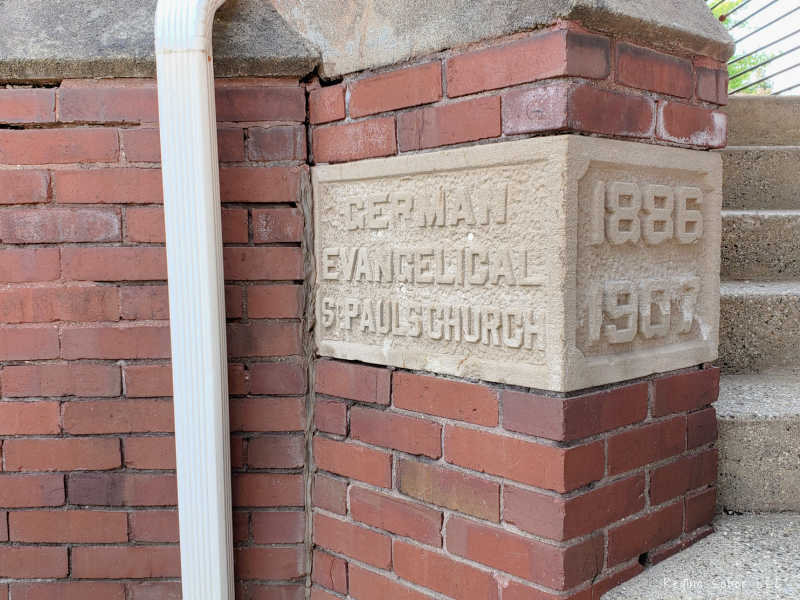 Cornerstone that shows the history of the church.

The building remains stoic with its red bricks in the downtown neighborhood on the corner of Walnut and Genesee. 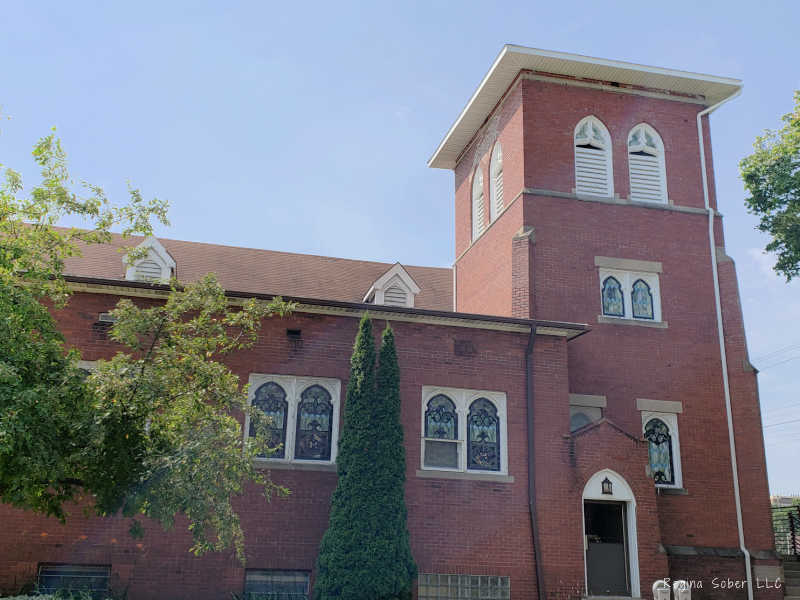 See the detailed stained glass on the windows on the side. 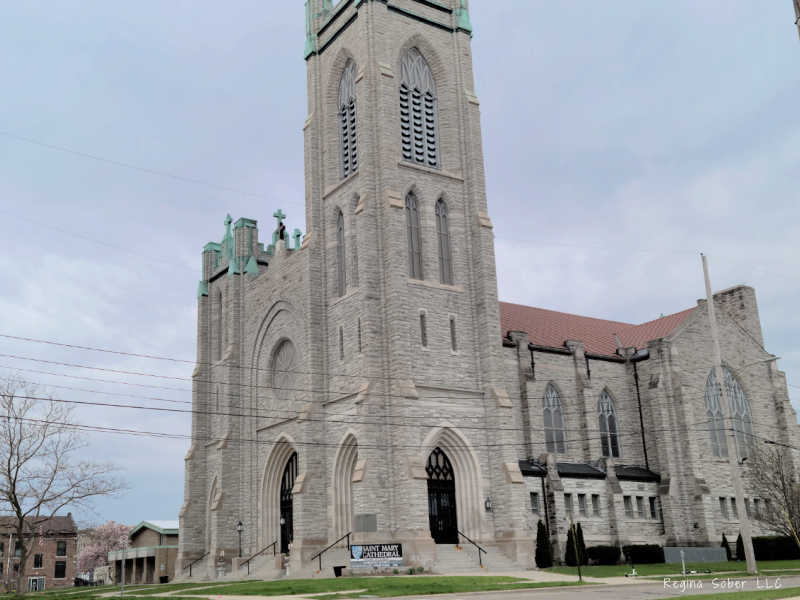 St. Mary’s Catholic Church is also a historic church located in downtown Lansing, Michigan. The church was founded in 1854 and is one of the oldest churches in the city. 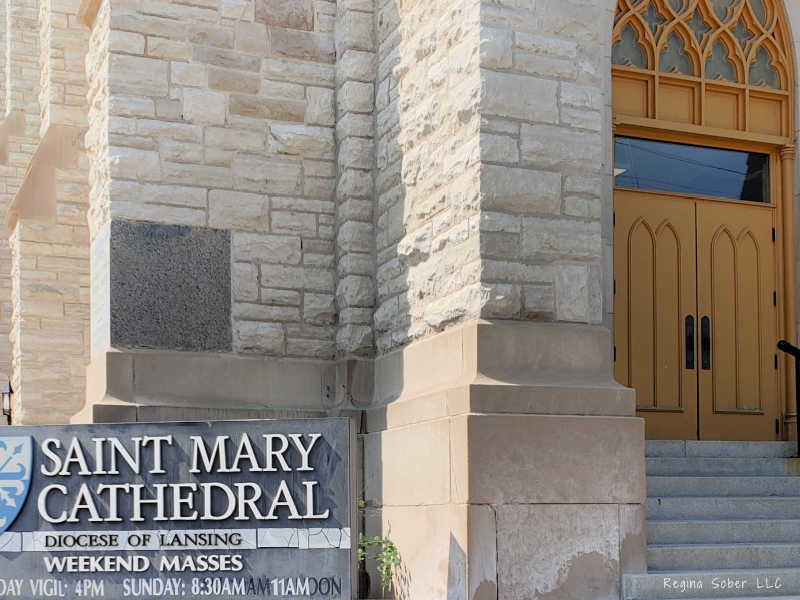 The first cornerstone was laid for the church in downtown Lansing July 4, 1911 and construction was completed in 1913. 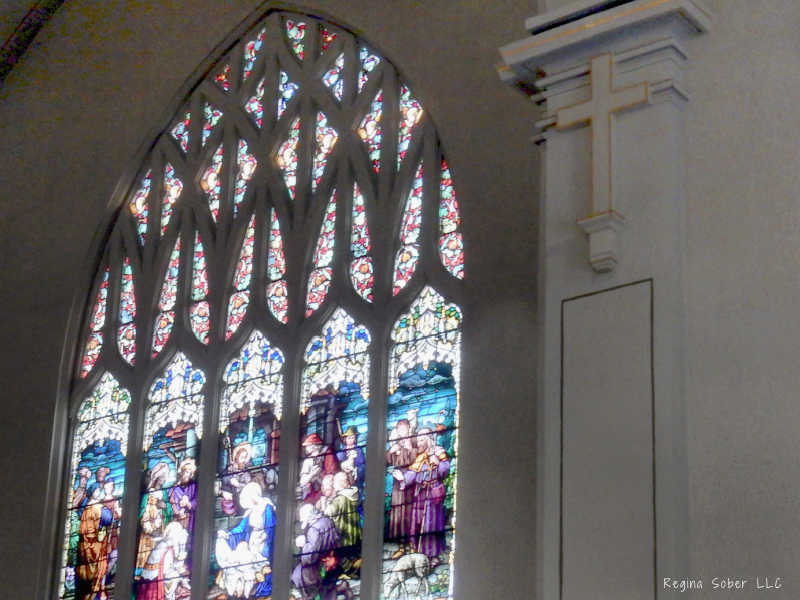 More than just stained glass, it tells a story as well. 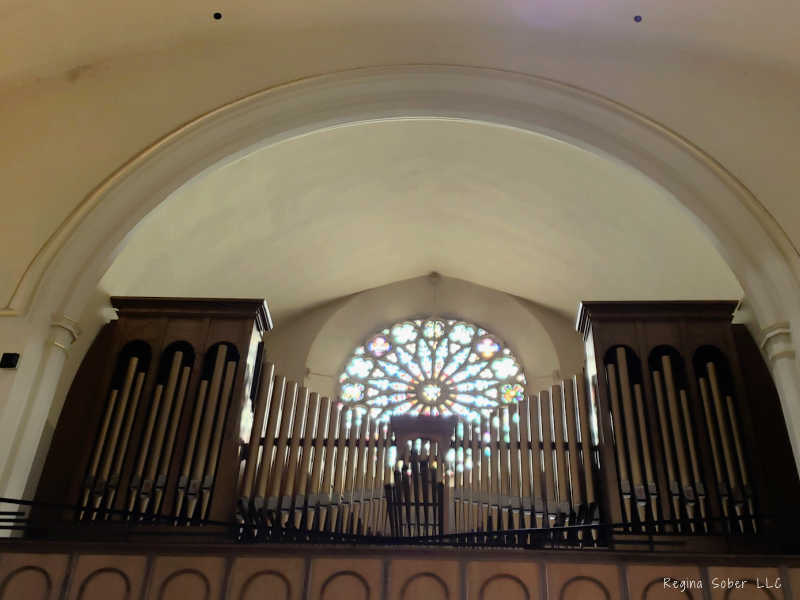 You can see the organ pipes along with stained glass.

The church’s roots in the city began long before with the first church building starting in 1856. St. Mary is now located just one block from the state capitol building on Seymour.

These are only a few of the many historic churches located in downtown Lansing, Michigan. If you are ever in the greater Lansing area, be sure to visit these beautiful churches and take in their history and architecture. Each of these churches has its own unique story to tell, and they all play an important role in the history of Lansing. 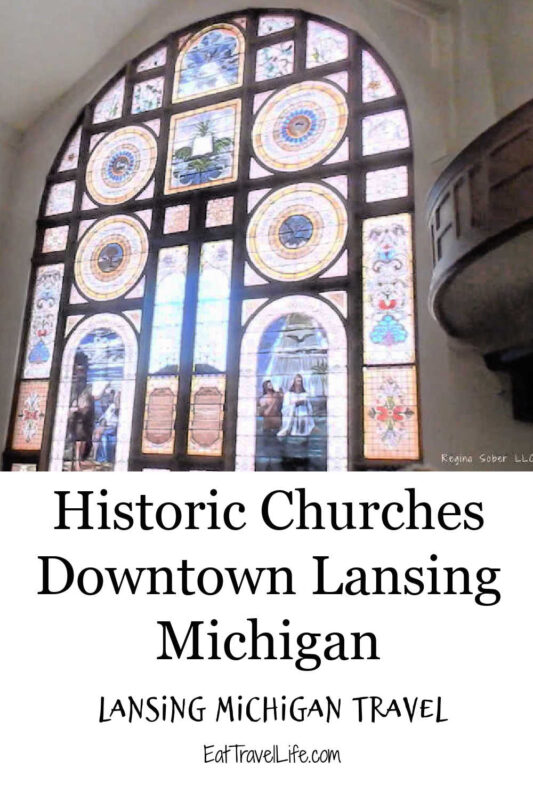